Posted by Inflow Tech Team on January 21, 2020 in Storage Devices ∞ 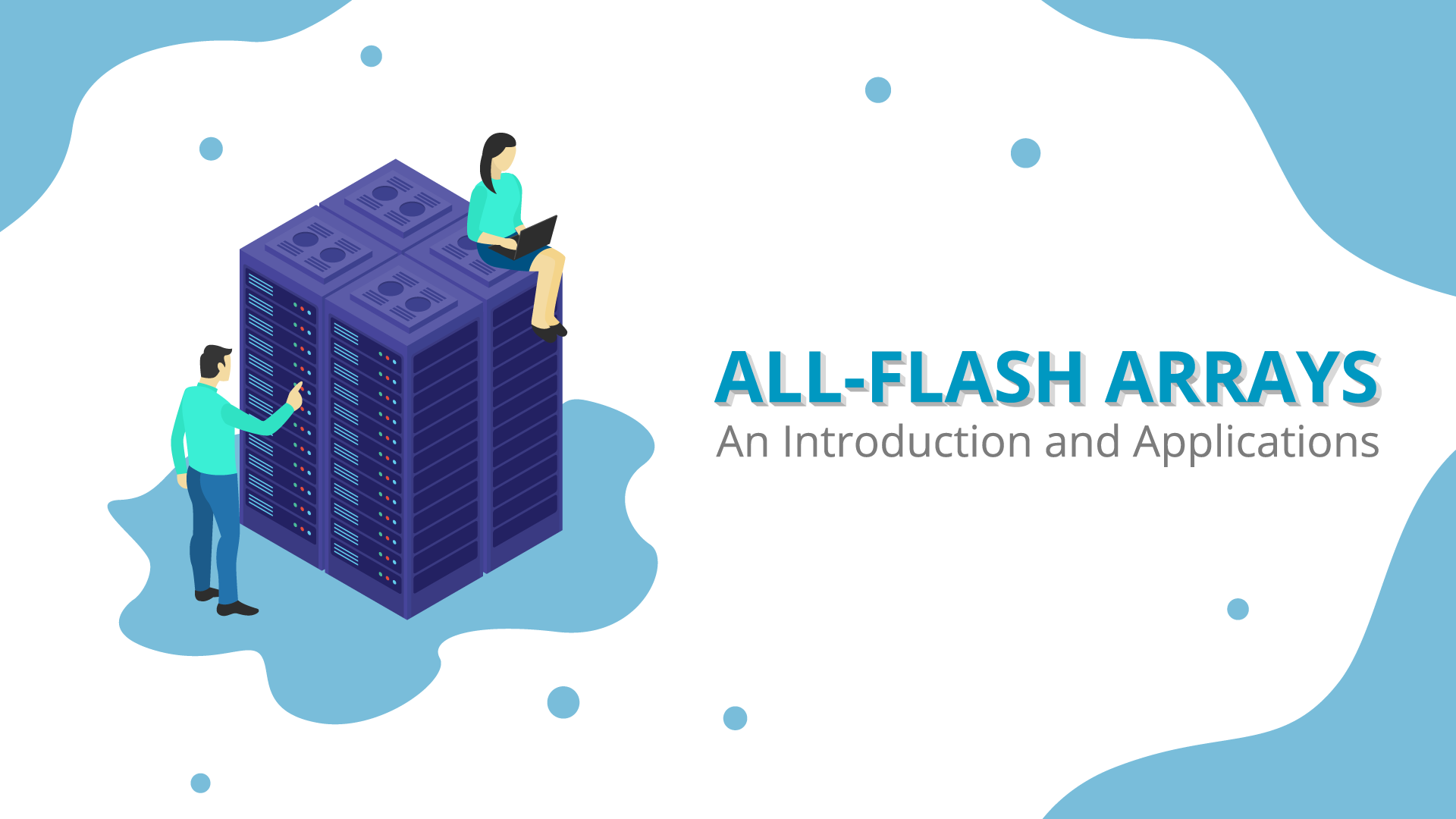 Did you know?
IBM invented the first magnetic hard drive in the year,1956. It was comprised of 50 21-inch(53 centimetres) disks and had a storage capacity of 5 megabytes.
With time, data storage technology has taken a quantum leap. All-Flash Arrays(AFAs) are a testament to the fact. AFAs are disrupting the conventional data storage industry.

What is an AFA?
An AFA is a solid-state storage disk system that contains multiple flash drives instead of traditional spinning hard disks; also, referred to as a Solid-State Array(SSA).

Hybrid Array
Vendors who sell AFAs usually allow customers to combine flash and disk drives in the same chassis. This configuration is known as a hybrid array.

Speed
A key feature which makes AFAs stand out is their speed. Typically, the latency of hard disks is in the low 10s of milliseconds while the latency of AFAs fall in the low single digits of milliseconds.
For instance, the desktop bootup time with a flash drive compared to that with a hard disk is astoundingly fast.
Regarding I/O speeds per second, a study by Dell EMC states that a system that requires 200000 IOPS (inputs/outputs per second) to run an application on, only needs10 high-end flash SSDs compared to 1000 HDDs.
Consequently, flash solutions need fewer servers, less energy, less storage administration time and hence, reduced funds to render an equivalent performance.

Architecture – Retrofit and Purpose-Built
Another prime factor which influences the performance AFAs is the array’s architecture. Based on architecture, AFAs are classified as retrofit and purpose-built. The former products are traditional arrays retrofitted with flash memory while the later products are purpose-built for flash.
The purpose-built kind is faster than the retrofit systems.
Many vendors offer both the options to maintain their foothold in the market while other vendors sell purpose-built products designed from the ground up and only supports flash.
The purpose-built models also embed a wide range of native software-defined storage features for effective data management and data protection directly on the hardware.
While the retrofit variant is much economical than buying AFAs, it also requires the purchase as well as the installation of third-party management software to supply the necessary data services.

Capacity
The capacity of AFAs is lower than that of traditional drive arrays; however, the gap is closing. Currently, AFAs reach approximately 100 TB, whereas traditional drive arrays step into petabytes of storage.
AFAs are the best fit for data that needs to read far more than written because each flash drive has only a finite amount of write cycles before it fails.

To whom is an AFA appropriate? – Industrial Applications
AFAs are targeted predominantly for extremely high-transaction or throughput applications where pace, time and I/O(input and output) ratio needed by the application are crucial. AFAs are preferred as the I/O rates of normal as well as enterprise HDDs have remained low since a couple of years now. Some use-cases would be financial trades, e-commerce sites or on-demand streaming services. Also, big data analysis or maintaining a significant database on them is another possible use-case of AFAs.
AFAs fit any industry that relies on networked data storage. For instance:
Uploading or downloading of CAD files can be done in seconds instead of minutes
Customer support staff could answer questions faster and reduce on-hold time by accessing read-centric databases quickly
Dynamically produced webpages can load much quicker

Also, some applications may need modifications to handle the high speed of data storage flawlessly. Hence, software development companies have started working towards it.
An SSD exclusive system will produce smaller variations than that of an HDD array in maximum, minimum and average latencies. It makes AFA appropriate for most read-intensive applications.

Considerations while buying AFAs
Deciding to but an AFA takes more than just comparing various vendor products.
An AFA that delivers optimal performance to a specific set of applications might not provide similar benefits for other workloads. For instance, running virtual applications using an AFA with inline data deduplication and compression is more cost-effective than an AFA that supports streaming media in which unique files cannot be compressed.
The tradeoff comes in write amplification, which affects how an SSD will rewrite data to erase an entire block. The write-intensive workloads require a specific algorithm to ensure the software always writes multiple changes to the same block of the SSD.
As AFAs can withstand only a finite number of write cycles, wear levelling can be used to increase flash endurance. Most vendors design their products with wear levelling; however, users with write-intensive workloads may individually test a vendor’s array to decide the best configuration.
If data needs to be stored permanently or changed frequently, disk-based storage, server solution or a hybrid solution is recommended.

Find out more about the merits and demerits of AFAs in our upcoming blog.